CRITICAL PEDAGOGIES AND THE IMAGE 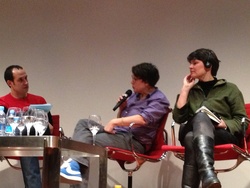 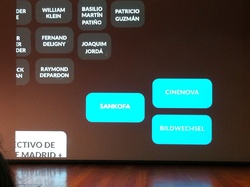 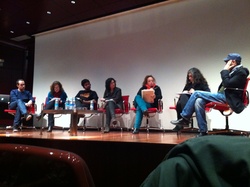 This seminar studies audiovisual works that use methodologies and processes of a collective nature at different levels. This seminar juxtaposes three fundamental lines of work related to the politics of collaborative practices in the field of images: the audiovisual production of new imaginaries, the participatory experiences they undergo upon reception and a pedagogy of the collective image.

The collaborative dimension entails a change in the way things are done. The management of how, when and where often requires negotiation and shared decision-making by all the participants. In other words, it implies a democratic process about how to build representations socially, culturally and politically. This methodology allows those participating in the project to appropriate the media and the knowledge of production, thus promoting a different gaze, one that deactivates the power and authority relations that govern the codes of the audiovisual mass media. To counter such a way of seeing, it proposes a dialogue-oriented gaze, one involved in the collective production of affects, subjectivities and forms of social relationality.

The relationship between what is told, how it is told and who tells it has enormous potential in performative experimentation, in that it allows for the creation of new dynamics and collective behaviours in this context. Therefore, many of the collaborative stories are built upon narratives about life stories and ordinary experiences, told by voices involved in specific contexts. The various projects invited to participate use a set of practices operating in spheres as different as education, urban settings and social action, with the intention of exploring alternatives to how we produce ourselves and are produced politically (beyond representation).

In this way, the seminar as a whole joins forces with initiatives intended to produce structures, narratives and places involving the common, as expressions that embody the public sense of the political.

Collaborative audiovisual practices in the construction of critical imaginaries. Discourses, experiences and methodologies

Round table: Collaborative Practices, Poetics and Politics in the new audiovisual narratives

Towards other modes of (co)production, distribution and reception of images

Presentation of CINE XXI. The Politics of Collectives http://www.cinesinautor.es

Round table: The collective image: reflections on modes of action in the production of the common
Participants:
Cine sin Autor and 100jours
Moderated by:
Subtramas (Diego del Pozo, Montse Romaní, Virginia Villaplana)

Sally Gutiérrez, visual artist and professor at the Universidad Europea de Madrid. She works with Gabriela Gutiérrez on the border between artistic and documentary practices.

Gabriela Gutiérrez, television and film producer and director. She works with Sally Gutiérrez on the border between artistic and documentary practices.

Angelika Levi, film director and producer. She is also a professor and a screenwriter. She has made Absent Present (2010) and My Life Part 2 (2003), among other documentary essays.

Odile Méndez-Bonito, the co-ordinator of the project 100jours, documentary filmmaker and the producer of various collective audiovisual creation projects within the association Les Yeux d'IZO (France).

Benoît Perraud, sound and video technician, and the technical supervisor of the project 100jours. He also makes film essays about the relationships between history, aesthetics and politics.

Diego del Pozo Barriuso, artist, cultural producer and associate professor at the Faculty of Fine Arts of the Universidad de Salamanca. He is a member of the group Subtramas.

Montse Romaní, researcher at the Universidad de Barcelona and cultural producer in contemporary art. She is a member of the group Subtramas.

Sandra Schäfer, artist, researcher and audiovisual programmer, based in Berlin.

Virginia Villaplana, artist and cultural researcher. She is professor of audiovisual discourse analysis at the Universidad de Murcia. She is a member of the group Subtramas.

Collective Cine sin Autor, advocates of a social production model based on nonauthorship. It is currently busy with the first Nonauthored Cinema Factory in the contemporary creation centre Matadero Madrid.