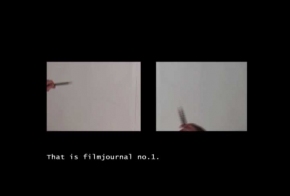 Two years after the end of the Second World War, Film Journal No. 1 was released in Sarajevo, and four years after the collapse of the Communist bloc this newsreel, which has only survived on nitrate film, was lost in the confusion of the fighting in Yugoslavia. In "Journal No. 1 – An artist’s impression"Hito Steyerl attempts to find out what was on this film document from Sarajevo’s Sutjeska studio. She listens to eyewitnesses, and according to her instructions artist Arman Kulasic made a number of drawings that resemble storyboards for some lost film.