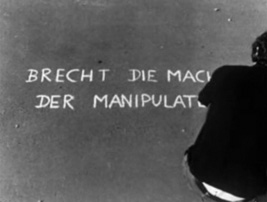 In the late 1960s, the Springer media empire launched an assault on the German radical student movement. When popular student leader Rudi Dutschke was shot in 1968, the Springer press was blamed and protests outside of the publisher's buildings turned violent, resulting in cars being burned and the deaths of two students. Filmed in the midst of these events, Sander's film exposes the distortions of the Springer press and draws its methods from the new organizational forms emerging out of the student occupation movement. The first half of the film, which moves slowly, portrays government bureaucrats and industrialists coldly voicing out loud the conservative dogma printed in the Springer papers they are reading. The film eventually turns to students planning and discussing "counter-publicity" aimed against the Springer press. Sander frames the film as an extension of the experiments in grassroots organizing occurring in the student movement, and the final section of the film expands its focus and documents the diverse activities of the students occupying what I presume to be Berlin's Free University.