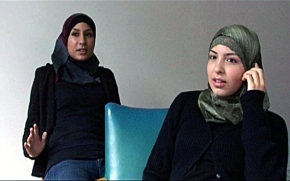 "For a longer time I have been interested in a discussion about how norms and values control our selections and interpretations of facts and events in society, and how we use these to create stories about the present andthe past.  On the 10th of January 2003, an article in a Swedish newspaper caught my attention. The headline read “Married Man Found Guilty of Having Sex with His Wife.” It was about a 13-year-old girl from Rosengård in Malmö that had married an 18-year-old man from Lebanon according to Islamic tradition. When the couple had a child in 2002, the police charged the man with sexual exploitation of a minor. The article explained how the man came to Sweden in the year 2000 and had his application for asylum rejected. At the time the article was written, both the girl and her child had been taken into care by Social Services, and the man had been taken into custody. The man had been charged because he was aware of the Swedish law forbidding sexual relations with anyone under 15. The event, as it was described in the article, can be incorporated into a contemporary public discussion about culture, Islam, and general social values. A private event had been exposed to the public and had become part of a general political discussion. But who was speaking and why? When I met the girl in 2003, I realized that the newspaper article had made me “culturally categorize” her and thus overlook the individual and her unique story. The girl told me that neither the journalist nor the prosecutor ever contacted or met her to listen to what she had to say. Nobody was interested in her story. Would it be possible to interpret the event in a different way? I asked the girl if she and I could make her own story visible in a film. She said that she did not want to take part in a film or take on a public persona. After a great deal of consideration, I decided to continue with the film. Although the film could no longer visualize her story, I wanted to understand who had the power to construct a story like this and how it was done. Since the girl did not want to participate, I decided to fictionalize her story. I gave her the name Rana and called the man Omar." (Petra Bauer)